The History and Evolution of Chatbots

Growing up, sci-fi movies always fascinated me. Remember the distress message from Princess Leia, in the form of a 3D hologram in Star Wars. Or the video calling scene from the movie Thunderbirds. By far one of my favourites is the character, J.A.R.V.I.S. an AI (Artificial Intelligence) from Iron Man, which also resembles the innovation of chatbots in today's time. Sci-fi has been the inspiration behind many such innovations.

Developed by Tony Stark, J.A.R.V.I.S. (Just A Rather Very Intelligent System) is an intelligent and self-aware bot that responds to Tony. Connected to global information networks, it used holograms as an interface to communicate with Tony and give him access to any information he needs.

Inspired by this Sci-fi AI character, Mark Zuckerberg created its own version of J.A.R.V.I.S., a personal virtual assistant to manage his home.

Apple and Google created their versions of J.A.R.V.I.S. for their users in the form of Siri and Google Assistant (which would have functionality like J.A.R.V.I.S. at a low dimension). Businesses are using this technology to connect with customers, answer their queries and maintain a good customer satisfaction rate.

A Brief History of Chatbots

While many would agree that chatbot has become a buzzword recently, but the concept has its existence from the time when people started developing ways to interact with computers. The first-ever chatbot was introduced even before the launch of personal computers. It was developed by MIT Artificial Intelligence Laboratory by Joseph Weizenbaum in 1966 and was named Eliza.

Eliza examined the keywords received as input and then triggered the output according to a defined set of rules. This methodology of generating output is still used by a number of chatbots.

The next chatbot was Parry, written by psychiatrist Kenneth Colby at the Stanford University in an attempt to simulate a person with paranoid schizophrenia. Then came the A.L.I.C.E, which was developed in 1995 by Richard Wallace. While A.L.I.C.E won the Loebner prize thrice, it failed to pass the Turing test. A Turing test examines whether or not a machine is able to think intelligently like humans.

The next chatbot was Parry, developed by psychiatrist Kenneth Colby at the Stanford University. It was an attempt to simulate a person with paranoid schizophrenia. Then came the A.L.I.C.E, which was developed in 1995 by Richard Wallace. While A.L.I.C.E won the Loebner prize thrice, it failed to pass the Turing test. A Turing test examines whether or not a machine can think intelligently like humans.

After this, various virtual assistants were launched. Siri by Apple was the first one to introduce conversational assistants. The concepts gained popularity and soon after Google launched their Google Assistant for Android. Following the lead, Microsoft brought Cortana into existence.

Taking this a step forward, smart speakers were introduced which made voice conversation possible between humans and the bots. Amazon Alexa & Google Home represents a different category of conversational UI. 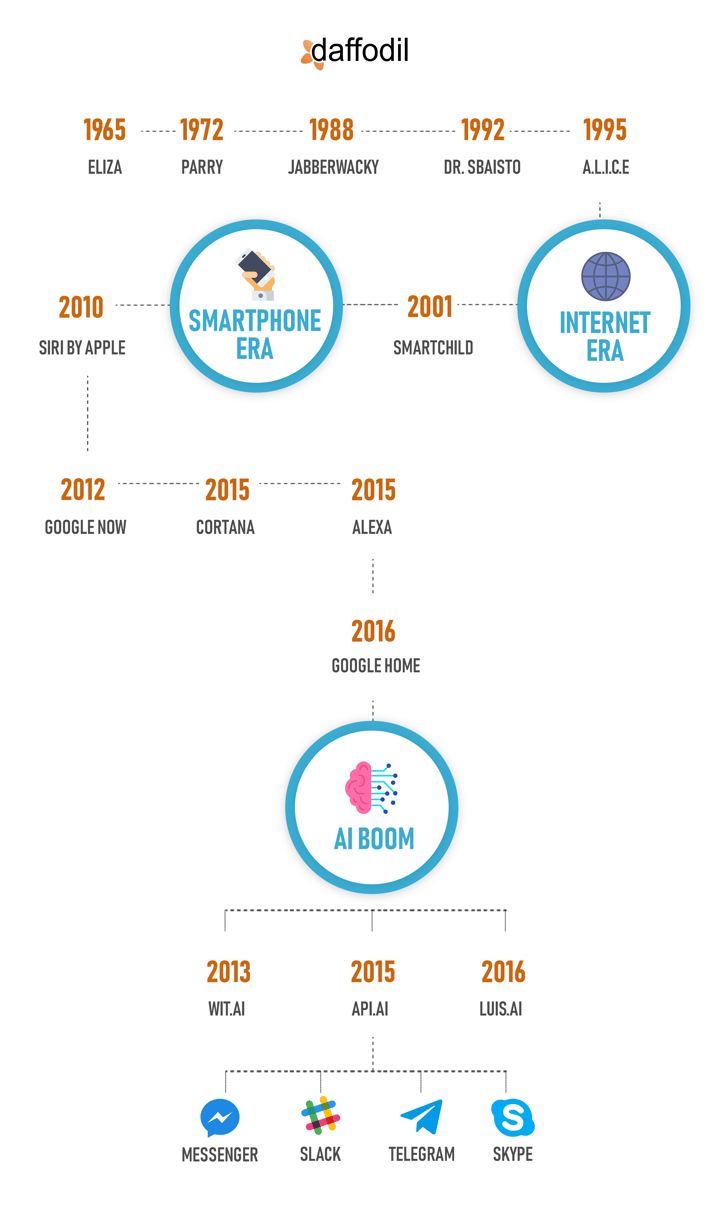 Chatbots in the Recent Past

Chatbots have an edge in the recent past because of two prominent reasons:

In 2015, Telegram opened its app for developers to build and deploy bots. Following this, Facebook opened its messaging platform, the Facebook Messenger for bot development and it garnered the attention of users as well as developers. Now, almost every popular platform including Whatsapp, Slack, We Chat, IMO offers the facility to build a chatbot.

Over time, there has been an improvement in the abilities of a chatbot and technology has been a real contributor to it. Artificial intelligence and its technologies have been helping developers in taking chatbots and their functionality to the next level. Today, chatbots are performing financial transactions, processing orders, resolving customer queries, and a lot more. We will be talking about it in detail in the upcoming segment.

Chatbots: Then and Now

The journey of chatbots from 1960 till date has been interesting. Chatbots have evolved in functionality, interface, and their significance to the business world cannot be ignored. Here is a glimpse of how progressive chatbots have been so far.

Tasks and Roles Performed: Chatbots have been a great conversational agent for businesses. For a long time, they were an efficient replacement of a customer service provider who is there for the customers 24/7. However, with chatbots being able to take new roles and responsibilities, they have become an alternative to mobile apps.

From simple conversations to complex transactions, chatbots are made to do almost everything. They are now used by businesses, irrespective of the industry and are used for placing orders, checking the status of the order, book flight tickets, make financial transactions, handle complex queries of the clients/customers, improve marketing campaigns, and a lot more. In short, chatbots are new apps for businesses.

Enhancement in UI Elements: As the chatbots evolve with better abilities, there is a shift in their UI elements as well. They have a Conversational User Interface (CUI) which brings a change to the way human-computer interaction occurs.

Depending upon the functionalities performed, several graphic elements are added to the chatbot. Along with text messages, there are carousels, buttons, quick reply, web view, group chat, option to share audio, video, document file, image, GIF, and more.

Technology Stack for Development: Chatbots are made to do a lot of things. Depending upon what a chatbot has to do, different technologies are adopted by the developers to build a chatbot. There are tools (like ChatFuel, API.ai, Botsify) that help to build a chatbot with less technical expertise. Then, there are technologies like Machine Learning, Natural Language Processing, RPA that can take chatbot abilities to the next level. Such abilities can be integrated by opting for custom chatbot development.

Modes of Communication: Chatbots have evolved to enable text and voice communication possible. Chatbots working in collaboration with virtual assistants or smart speakers allow users to give input and receive output in a voice format. Here is a perfect example of it- Mark Zukerberg's JARVIS.

Significance of Chatbots for Businesses

As chatbots evolve with better functionality and features, businesses, irrespective of the industry, have been using chatbots to improve efficiency in operations, customer service, cut down errors, and more. While chatbots have various benefits to offer, businesses need to examine the right use case of this technology and then implement it.

To get started, you can check out our guide sharing the best practices to launch customer service chatbot for your business.

Still need help to launch a chatbot for your business? Set a free consultation session with our chatbot expert who analyze businesses to understand best use cases of chatbot and help you out with best technology stack for chatbot development.

How Retailers Can Improve Customer Engagement and Conversions with Beacons?