How to Estimate Cost of App Development?

Mobile apps continue to be the elementary drivers of businesses today. From startups to Fortune 500, from consumer-facing (B2C) to business-facing (B2B), almost every business model is involving mobile app into their technology roadmap.

Certainly, high engagement of users with smartphones today makes mobile apps a salient part of the businesses strategies today. Surveys and studies that happen to occur from time-to-time reveals that:

Meanwhile, the confidence of businesses in mobile apps can be justified from the fact that Google Play Store and Apple Store collaboratively hosts over 5 million apps. Moreover, mobile apps are turning out to be a great revenue model as well.

Mobile app development is often envisaged as a process of putting-in logics together, doing a quick bit of testing, and finally deploying to the app store. However, the app development cycle is a little complex and requires a lot of thought work to turn an idea into successful reality.

When it comes to estimating cost of app development, people confront a number of challenges that includes:

Considering the challenges involved in estimating cost of product ownership, we share a list of elements that help to build an economical and successful mobile app development for both Android and iOS platforms.

How to Estimate Cost of App Development

Imagine you planned a reunion at your place, invited all your mains, made arrangements for their engagement, but unfortunately, only a few showed up. The much awaited get-together plans that you thought would be great fun turns out to be a damp squib. Harrowing, isn’t?

While such failures at personal levels cause less damage, ensure, this does not happen with your mobile app idea. Before you get started with your app development project, with an in-house team or an outsourcing partner, make it a point that you start with a Minimum Viable Product (MVP).

MVP not only helps you to deal with the uncertainty of an app idea but also informs about the features and functionalities to be added at next stage of development. Because it's not possible to have a complete picture of what will work out and how, starting with a Minimum Viable Product is definitely a wise decision.

To start estimating the total cost of ownership, business stakeholders and application developers must plan a meeting that discusses the core components of a MVP. While designing the features for a Minimum Viable Product, ensure that it includes functionalities that customers will find useful. Once this is done, MVP can be developed and launched, which then enables the app reach the targeted audience, enhance user base, and receive feedback, which will help to drive successful iterations.

When you develop a clearer picture of MVP and get to know the improvement suggestions in real-time (from the users), it can help to predict the future enhancement costs of the mobile app. In short, you will be able to make informed guesses about the cost for additional phases of development.

At every stage of mobile app development (conceive, construct, continue), there are elements that exert influence on the overall cost. Here are a few of them.

Unfolding the elements affecting the cost of app development

READ MORE: What are Progressive Web Apps and How they Work

b. Out-of-the-box UX: User Experience (UX) is the watchword in the app industry. While simplicity is the key to a great UX, giving an unusual experience to the user can make your app stand out. For example: If a hybrid UI/UX design is required to be built or one that takes support of animations, Augmented Reality, scanning etc.

c. Location Based Apps: For apps in the categories like social networking, entertainment and security, location based services are turning out to be the basic requisite. Development of mobile apps that work with the location (for tracking a person or object) is a bit complex and thus may affect the cost.

d. Backend Development: If you are developing a portal where data is fetched from different sources and rendered, then, an extensive backend is required for sure. Take example of apps that help you to compare, book, and track flights. Another example of this is streaming apps that brings you the best of videos online from N number of sources. If you are getting a backend developed with mobile app, and that too an extensive one, an added cost of what you should be ready for.

e. Sensor Data: If your app collect sensor data through smartphone, then such kind of developments may take your app charges, a little higher. Such a functionality is often seen in cases of healthcare application development.

f. MVP Development: We discussed the benefits of Minimum Viable Product is estimating cost of an app in the aforementioned segment. While MVP can help to estimate cost, understand features and functionality requisites in the iterative stage of development etc., it will also add up to your development cost. Because an MVP is a functional model of your app, with least functionalities, it takes equal time and effort to build a MVP.

g. Technology in Trend: IoT, Machine Learning, virtual assistants, Augmented Reality, Virtual Reality, Blockchain, are some of the technologies, creating buzz in the tech-ecosystem. If your apps are enabled with these tech-trends, then you can certainly expect an extra cost. 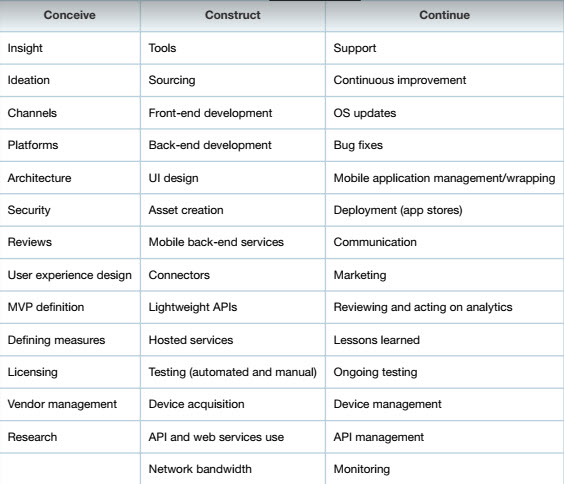 As much as your app idea, design, and development matters, a right technology partner interpret it matters too. You can either set up your in-house team or outsource it to freelancers, offshore teams, or a full-fledged app development shop.

If you have a technical co-founder (or a CTO), who can look around the team and development process, you can have an in-house team. This may be a pricey affair as you will have to hire an expert for almost every phase and activity involved in development.

You can outsource offshore teams if you want help only for certain development phase. For example, you have UI/UX designers, research team, and testers available but you don’t have a mobile app development team.

Else, you have the option to outsource it to freelancers or a full-fledged app development shop. However, between the two available options, it is always a good move to entrust a professional company over freelancers.

All of the options have their cons and pros. But, while choosing your app development partner, you have to understand that cheaper is never better. Always be calculative for the features, functionalities, and do a comparison. And remember that a smart decision at the start leads to a successful end.

ALSO READ: 12 Things to look for in your Mobile App Development Partner

2. At any Cost, Product should Come First

Pricing certainly is the most important factor but it should always be secondary. It should be the product that takes the front-seat, always. Spending for a successful product is anytime a great idea than building an inferior product that will only make you bear losses. Therefore, never compromise at any stage of development, be it spending extra dollars for prototyping, for technology that augments app’s performance or usability, for regulations and compliances etc.

3. Do not Underestimate Designing Cost

According to a study by Localytics, 23% of the users abandon an app after first use. And one of the major reasons for such low app retention is either the poor performance of the app or bad UI/UX.

In majority of cases, stakeholders and application leaders prioritize app performance so much that usability takes the backseat. That is why, it is recommended not to underestimate the power of mobile app prototyping, user onboarding, UI/UX with human psychology, and other UX elements.

How much Does an App Development Cost: Key Takeaways

7 AI Technologies that will be in Forefront in 2018

3 Impactful Use Cases of AI in Capital Market