Understanding Software Containers and their Orchestration

The modern approach to software development needs more focus on application than infrastructure. This has led to the introduction of new technologies and platforms that can help in the auto-management of infrastructure. One of the popular approaches that have gained ground in this concern is software containers.

A container is a standard unit of software. It packages up code and all the dependencies so that an application can run in different computing environments, reliably.

The upcoming segment discusses the need and role of containers in software development. Also, we will explore the benefits of containers over a virtual machine, understand what is container orchestration, and the platforms used for it.

Role of Containers in Software Development

Containers work around this portability issue. It separates the code from the underlying infrastructure that it runs on. Using the containerization approach, developers can package their code (including required bins and libraries) into a small container image, making it possible to run code in any other environment.

Along with resolving this portability challenge, containers and their orchestration platforms have a number of advantages to offer over traditional virtualization. Let’s understand this.

Why Containers Over Virtual Machines?

A virtual machine includes hardware, host OS, hypervisor, and a guest Operating System to host the application. The entire system will have all the necessary elements to run the apps- memory, storage, computing, hardware functionality, binaries & libraries. As this system scales, a separate guest OS and library have to be deployed, even though a similar application is replicated (App B and App C) in the picture below. 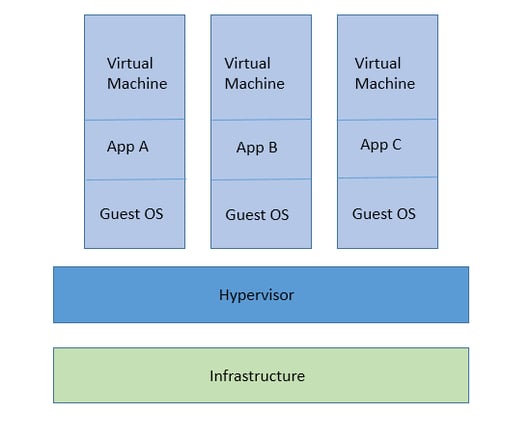 Containers create an abstraction at the OS level. It packages code and dependencies together. Since we don’t have to duplicate all dependencies and create loaded VMs, containers take up less space (container images are typically tens of MBs in size).

It’s the container image that includes all the information to be executed at runtime on the OS, through a container engine. A containerized application can have multiple container images. For example, a 3-tier application that has a frontend, backend, and database will have 3 containers, each of which will execute independently. Containers do not retain session information and are inherently stateless. At a time, multiple instances of a container image can run simultaneously and if any of the instances fails, a new instance will be active as a replacement.

Container Orchestration: What it is and Why it is Needed?

Container orchestration is provisioning, automating, and managing containers at a scale. It describes the way containers coordinate in their dynamic environments. There are a number of container-related tasks that can be automated through orchestration, which include, but are not limited to:

Containers certainly have a significant role in modern software development. What according to you is the biggest advantage of containers? Share with us in the comments below.

How Retailers Can Improve Customer Engagement and Conversions with Beacons?