Cybercriminals are constantly waiting for opportunities to exploit your organization's system security flaws. While the motivations of these hackers vary, be it political, financial, or just to gain notoriety, they all constitute a severe threat to your company's confidential data. There are several points of entry known as security vulnerabilities that are defined by the Open Web Application Security Project (OWASP) community.

Awareness about these vulnerabilities that could put your network at risk, and then plugging those holes before an attacker can breach them, is an important part of protecting your business against modern cyber threats. In this article, we will list the top ten most common security vulnerabilities for 2021-22 as defined by the OWASP's last released publication.

As per Statista, 2020 saw the highest number of common security vulnerabilities discovered worldwide, at 18,325. This is an indication of how increased acceptance and implementation of remote work is leading to an increase of cybercriminals finding new ways to breach organizational networks. 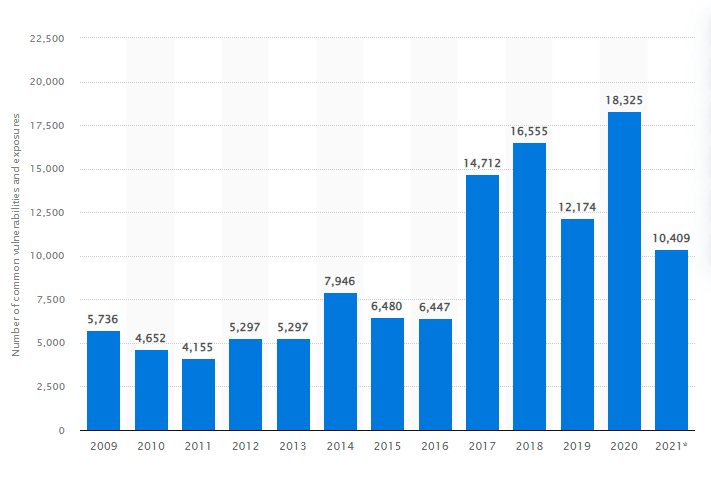 Experts on the other side of these breaches, those that are attempting to find protective measures against them, do so by categorizing the type of vulnerability as it is discovered. The causes of cyber security vulnerabilities are defined as follows:

A network vulnerability is a weakness in software, hardware, or internal practices that can lead to a security breach if it is exploited by an attacker. If an operating system isn't updated with the current security patches, it could be vulnerable to network intrusions. A virus could infect the OS, the host it's on, and potentially the entire network if it isn't patched.

Operating system vulnerabilities are defects in an operating system that allow attackers to disrupt any device over which the OS is installed. A Denial of Service (DoS) attack is an example of an attack that exploits OS flaws by overloading a system with fraudulent requests, prompting it to become saturated. Because the machine running the application is accessible, unpatched and outdated software introduces OS vulnerabilities, potentially putting the entire network at risk.

Human workers represent the weakest link in many cybersecurity frameworks. Errors as simple as leaving a password written on a piece of paper can readily expose sensitive data, providing attackers with exploitable access points. Other issues could be a manual overload of the server by overuse or overabundant use of access points that can cause systems to malfunction.

Certain enterprise-level processes that have been monitored with caution can lead to major security vulnerabilities. These processes need to be stress-tested and taken through due diligence to qualify as compliant before they are established as organizationally fit. With mismanaged processes, attackers have plenty of ways into the organization's mainframe.

Most Common Security Vulnerabilities As Per OWASP

OWASP is a web community that was established as a non-profit organization that constantly strives to maintain the security of software products, devices, and frameworks. They conduct online chats and projects where individual contributors can provide their two cents on cyber security. According to several expert opinions accumulated by OWASP, the 10 most common security breaches happen from the following vulnerabilities:

Based on whether the web application accepts user input, injection vulnerabilities enable a user to gain access to the backend database, shell command, or operating system call. Potential attackers can read, generate, edit, and remove data by concatenating more information to these input boxes. They may be able to attach full scripts to apps and hence execute commands as a result.

Broken access control refers to a scenario wherein attackers can obtain access to, change, remove, or perform a set of functions that are not authorized by the application, framework, or system. The access control is considered broken when regular users can gain access to admin-only authorizations through alterations done on parameters in a URL. This can be done through visualization maneuvers or exploiting an authorized user's sensitive data, or through the application of privilege escalation.

The OWASP claims that cryptographic failure is one of the primary causes and one of the most recognizable symptoms that show that sensitive data has been exposed to a cybercriminal. This is often started by incorrectly using cryptography like in case Initialization Vectors (IV) are reused, leaking information about the plaintext's first block and the most common prefixes to it. Managing keys badly could also lead to operational cryptographic failures through channel leaks, or inference data being transported to the unauthorized person.

Attackers can threaten model workflows in software to open up a wide range of vulnerabilities and flaws, allowing them to exploit unsafe designs in the software products. The attacker looks for weak APIs and finds one that fails to properly filter input vectors and bypasses the organization's API security gateway. OWASP recommends that companies implement principles such as threat modeling, secure design patterns, and reference architectures to ensure safer software designs.

Security misconfigurations occur out of security measures that are incorrectly configured or left insecure, leaving your systems and data at high risk. A misconfiguration could be caused by poorly described configuration modifications, not changing default settings, or a technical issue with any element of your endpoints. Organizations are exposed to misconfiguration assaults due to a lack of clarity and a centralized procedure to correct these misconfigurations.

Authentication vulnerabilities related to how strong it is or how it is implemented can lead to potentially damaging data breaches. Attacks targeting this vulnerability include credential stuffing, session identifier exposure, brute force attacks, session fixation, and so on. Sometimes a strong attack can also be aimed at password data stores.

Due to faulty assumptions in software testing, misguided development mechanisms, and sometimes even non-existent mechanisms, the constituent components of web applications are vulnerable to attacks. The services of the application could be broken up without the essential integrity checks in place by the developers. Security assumptions that may have been made in the past may not apply to a modern distributed technology stack. Threat modeling resets are required in such instances, but they are often neglected.

Oversight in adequately logging, monitoring, or notifying security events such as login attempts makes suspicious behavior difficult to pinpoint and increases the chances of an attacker effectively exploiting your application. Allowing long-term scans of the applications to go undetected enhances the chances of the attacker discovering a vulnerability and exploiting it successfully.

The Server-Side Request Forgery (SSRF) vulnerabilities let attackers submit forged queries from a sensitive application's back-end server. SSRF attacks are commonly used by cyber criminals to attack internal systems that are shielded by firewalls and are not accessible from the outside network. An attacker might also use SSRF to get access to services provided through the compromised server's loopback interface.

The Right Security Protocols Can Safeguard Your Enterprise Application

To be regarded as ready to go live and make available to users, your software program or network must be protected against the ten vulnerabilities listed above. A good security protocol, for example, can replicate the actions of an actual attacker to find flaws that aren't discovered by standard security enhancement techniques.

A technology partner such as Daffodil, with its Software Maintenance and Support Services can provide highly secure solutions for your application development needs. Book a free consultation with us today.

A Guide to Salesforce Integration Services?