Over the years, organizations have been implementing Agile methodologies to speed up the software development cycle. While Agile was initially embraced for development process, it has progressively expanded into other downstream areas, i.e. IT and Operations. It has helped team to streamline the development process, receive timely feedback for improvements, has ensured that the entire process picks a pace for on time product delivery.

Taking this systematic development a step ahead, DevOps have emerged out as a medium to connect development and IT operations, primarily through automation, which ultimately improve agility and time to market throughout the software development cycle.

DevOps: Laying the Basis on Agile

Back in 2001, when The Agile Manifesto was introduced, it presented the idea of dividing the software development cycle into small chunks, known as ‘user stories’. This as a result enable developers to align the product features according to market needs and accelerate the feedback loop for continuous improvements.

Ideally, Agile aimed at small development teams gain momentum in product delivery by working in sprints. As this methodology for product management started to get adoption, one of the major challenges that it confronted managing projects with scalability. While developers were able to produce a functional code base in shorter iterations, the process got fragmented when moved to downstream processes, such as testing, deployment, and release. This majorly affected the time to market of the applications.

As a work around, Agile gave rise to new processes (like Continuous Integration) that aimed to streamline and automate the product delivery cycle. CI included frequent testing of code base and integration with the release, which helped software product engineering teams to shorten the time the market. 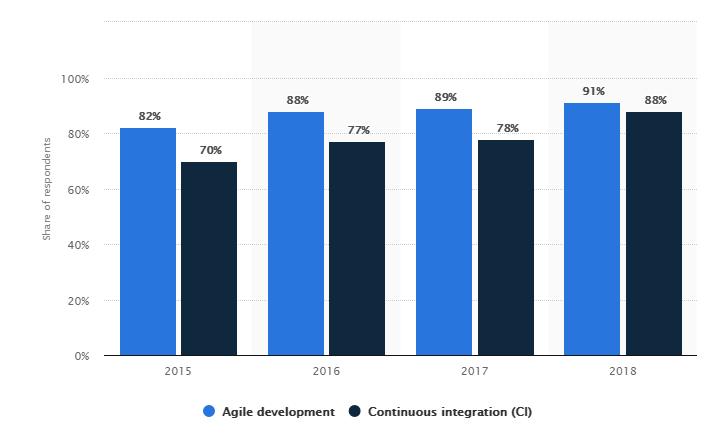 However, with the advent of Continuous Integration (CI), code testing and its integration with the release was practiced quite often, which became the strained taske for Operations and Quality Analysis team. To work on the shortcomings of CI, Continuous Delivery (CD) was adopted in the development cycle, which embraced the idea of treating a software lifecycle as a single process. The entire process of engineering a software under CD is automated and can be adopted by startups and Fortune 500 companies.

The Advent of DevOps and Continuous Delivery

Continuous Delivery (CD) is a set of practices and methodologies that are designed to streamline and automate the software delivery cycle. By automating product engineering cycle through CI builds, testing, deployment, Continuous Deployment include R&D and Operations team into the scope. Consequently, it enables systematic and frequent release of qualitative product at the users’ end. Extending the agile practices to Continuous Delivery and DevOps for software product engineering ensures that the output is delivered with accelerated time to market with reliable releases and customer satisfaction.

How Gamification can Improve User Engagement in Healthcare Apps?