Application Containerization Vs Virtualization: How Are They Different?

Most recent conversations around making the software development lifecycle more efficient revolve majorly around two concepts, app containerization, and virtualization. Virtualization and containerization are two of the most widely implemented mechanisms for hosting and developing an application.

The principal objectives that both of these application development paradigms achieve are the same - boosting application portability, enhancing DevOps, and gaining tools for a better software development lifecycle. While they may be similar in their end goal, virtualization and containerization are unique and distinct in many ways.

We will discuss what happens in both these processes and identify the differences between the two. After that, we will also attempt to delineate the pros and cons of choosing one over the other.

Virtualization refers to dividing up an all-encompassing physical server into smaller units. Each unit within the larger infrastructure gets its separate set of tools assigned to it. These tools consist of binaries, libraries, drivers, and each unit's individual operating system. The most vital elements that enable virtualization are:

VMs provide an added level of security. This is because isolation between each VM provides operators with better control of the applications that are contained within each VM.

Lightweight software layers known as hypervisors are the most essential components for virtualization. A hypervisor can be a hardware, software, or firmware-based intermediary between physical computers and VMs. It allows for multiple operating systems to run alongside each other within the same system.

All VMs within the system are virtual copies of each other which means they all use their own operating system. This makes them resource-heavy while consuming a lot of memory. Meanwhile, they use plenty of processing power and are therefore slow. That is where containerization is adopted to resolve some of these problems.

Many of the above problems of virtualization can be solved with containerization. This is done by bringing the concepts of virtualization to the level of the operating system. By compartmentalizing the application, its dependencies can be encapsulated into its environment using the following elements:

The use of containers allows the various components of the application to run in isolation while using the same system resources and a common operating system. Each container exists as a lightweight container image composed of a few megabytes. This makes it easier to migrate, share and move the entire application.

A container engine is a layer in the development environment that can easily manage a multitude of containers. This allows developers to create, add and remove containers depending upon the requirement. Fixing bugs and updating patches in a single operating system also makes the maintenance of containers simpler.

Containerization largely reduces hardware costs by allocating multiple applications to the same hardware thereby improving the utilization of the bare metal components of the software development lifecycle. However, any vulnerability in the host kernel of the operating system will affect all of the containers as well. 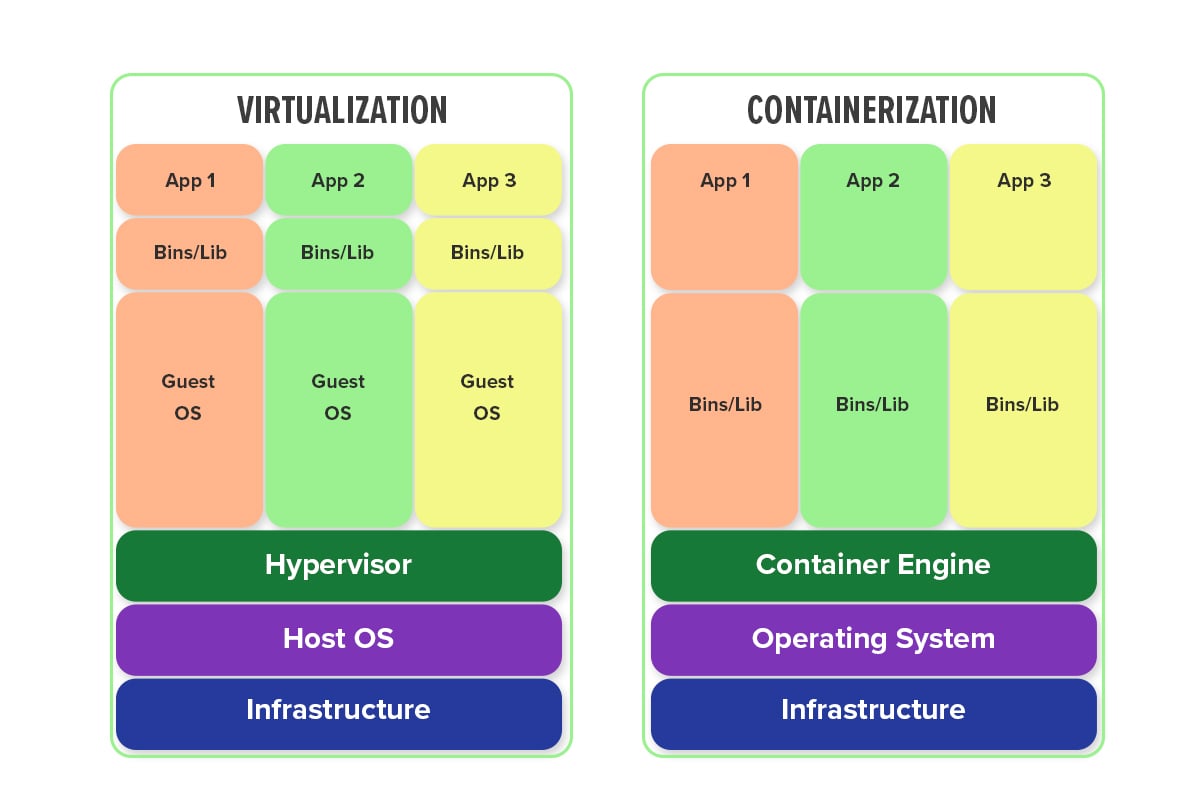 Major Differences Between Containerization And Virtualization

When choosing between containerization and virtualization there are a variety of factors to consider. Based on the methods used to develop an application, the business development, and the operational model, the choice can be made. The following points usually help organizations select the right development paradigm:

Virtualization involves the use of separate operating systems and every system call passes through the virtualization layer. This means that more resources need to be used, creating a certain amount of overhead. The memory utilization in VMs is also pretty high as they consume memory even when not running.

Containers consume far less memory and this amount does not increase over time either. They can start up quickly and have much less overhead because of the use of the same operating system without a hypervisor to go through.

The temporary nature of containers makes containerization slightly more advantageous than virtualization. In the orchestration process, several copies of containers exist simultaneously. When one container goes down, it can be removed and replaced without any change or impact on the application's services. Old and new versions of a container can co-exist in the same orchestration system.

Containers are designed specifically to reduce the time needed to deploy and run an application. Since the operating system is already up and running, the container starts immediately which is great for the application testing cycle.

VMs are on the opposite side of this spectrum, as they need to start the operating system during the full boot process. It would take much longer for a VM than a container to start up the services.

Containers save space on the host filesystem as they are much smaller in size than VMs and are easier to transfer. VMs are less portable as they require a copy of the whole operating system, including the kernels and configuration libraries.

Container images can be easily shared through several hubs for application sharing on the internet while images of VMs do not have such centralized hubs. The supporting files that go along with the VMs make them too bulky for portability.

Containers, despite being fast, highly portable, and easily set up, lack certain supporting resources. Containers do not come with a dedicated operating system, processing, and storage resources. So, while containers are ideal when several applications need to be run on a limited number of servers, VMs are better suited for applications to be run for a long run. VMs offer such applications with a more robust and versatile development environment which allows a sustainable application lifecycle.

Choosing The Right Technology For Your Application Lifecycle

The development architecture that is most suitable for your application development lifecycle comes down to the specificities of your application itself. While both containerization and virtualization provide distinct benefits, the most ideal approach is combining both for hybrid container architecture. This combines the security and isolation of VMs and the lightness and ease of setup of containers.

With Daffodil, you get to explore a range of Custom Software Development Services to find the perfect fit for the requirements of your application development lifecycle. Book a free consultation with us today for cost-efficient, and time-bound solutions with the latest technology stack.

7 Types of Patient Healthcare Apps that are Doing the Rounds