All About UI Development With Blazor

Most UI developers have traditionally relied on popular Javascript frameworks like Angular and React for building single-page applications. However, Blazor, a 2018 launched framework is creating a lot of buzz in the UI development market. It allows writing  client-side processes using C# and is slowly gathering mainstream interest.

Blazor is developed by the ASP.NET team using the .NET platform that uses a vast library of tools for building web apps. Apps developed in Blazor are composed of reusable UI components that are created and implemented using C#, HTML, and CSS.

The ability to write rich web UI experiences using HTML, CSS, and C# instead of JavaScript is a refreshed development experience to developers. This is a major reason behind some of the hype for Blazor.

In this article we will discuss the advantages of Blazor over popular JavaScript frameworks in building single-page applications. We will look at some of Blazor’s reliable renderers and also explore how this framework can enhance JavaScript.

Why Is Blazor Piquing The Interest of UI Developers?

Blazor's advantages lie in the way it treats the UI changes and the rendering of these changes thereafter. Tools like Angular and React can be used to develop UI for web technologies, but Blazor makes creating UI for mobile apps a tad easier for developers.

As Blazor's components work in a different way than JavaScript UI tools, developing UI for both web-based applications as well as native mobile apps becomes seamless. It further enhances this by offering access to a wide variety of renderers.

At the foundation of the Blazor programming model, the changes done to the UI are meticulously calculated. By using the right renderers, also known as hosting models, the developer can control how the UI's display looks and feels to the user. 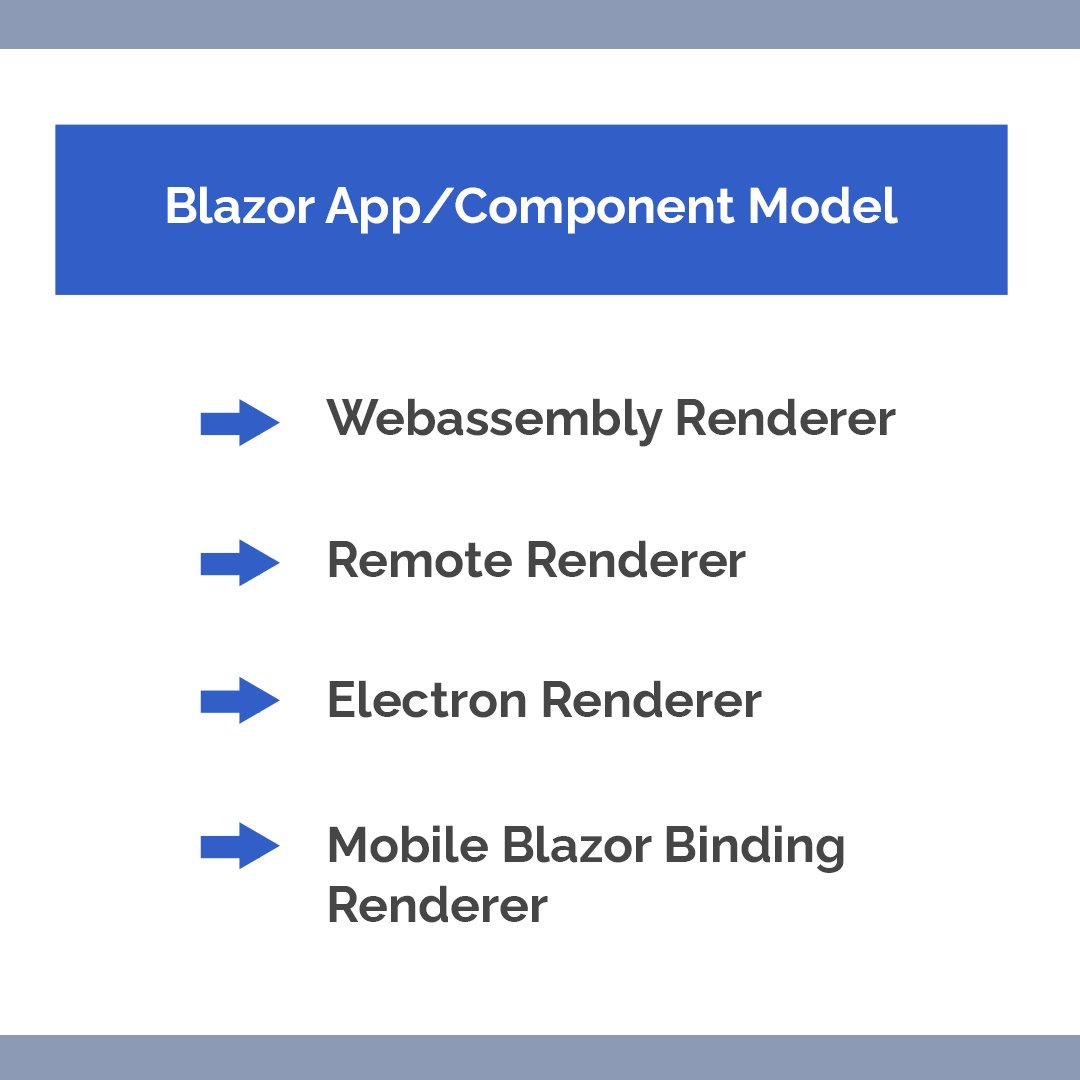 The following are the four major hosting models used for the various UI development stages:

In the Blazor development workflow, the server hosting model is the sole production-oriented component. The Blazor application runs on the server on top of the .NET core runtime. When the user installs the application, a small JavaScript file also gets downloaded alongside it.

The primary reason for Blazor's tough competition to JavaScript frameworks is WebAssembly. This renderer enables the developer to write code in C# instead of JavaScript. This is done when WebAssembly downloads a small version of Mono, an open-source .NET framework for cross-platform development.

The Mono runtime gets bootstrapped once all the application library files are downloaded into the browser. The size of the downloads is currently at 2.4 MB which is negligible as it is. Nevertheless, the ASP.NET team is working on reducing the size of these files.

The interpreter provided by Mono interprets the application loaded and executed by Blazor WebAssembly. The developer can then decide if their entire app or parts of their app would be compiled to the WebAssembly renderer. There would be a large file to be downloaded but ultimately, the performance would improve greatly if rendered on WebAssembly.

Electron is an open-source tool to create cross-platform applications for Windows, macOS, and Linux by wrapping around the application. The developer can use the C# language and other web technologies to invoke native Electron APIs.

Developers can make use of the Chromium rendering engine and the Node.js runtime to build and launch the applications. Electron requires the installation of Node.js and .NET 5.0 software.

To transform a generic Blazor project into a desktop Electron application, a Nugent package, containing Electron APIs, needs to be added. The final touch is the insertion of some initialization code and installing a command line to perform builds.

The experimental Mobile Blazor Bindings allows developers to use the Razor syntax for building mobile apps. Razor is easy to learn and compact. There are more than a dozen Blazor Bindings for Telerik UI for Xamarin made available by this renderer. The Xamarin UI components allow developers to build wrappers for custom controls. In addition, there are built-in components for pages, layouts, views, and specializations.

Customized web development companies appreciate the capability to develop applications with an amazing UI. Blazor offers this provision with a wide spectrum of predefined UI components. Blazor's growing developer preference comes from this and some of the following additional benefits:

Enhancement for JavaScript Rather Than Replacement

Blazor should not be thought of as a framework that would make the use of JavaScript frameworks obsolete. This is mainly because Blazor relies on JavaScript components to power some of its features.

Additionally, Blazor can be pre-compiled into an intermediary language that would enhance frameworks like React. While React has one of the best libraries of tools for web development, Blazor makes up for where it lacks in code sharing ease. Moreover, other JavaScript frameworks like Angular still remain more recognizable and understandable for C# developers than Blazor.

The future of UI and single-page application development will be led by Blazor and every software solution today can leverage its numerous advantages. For efficient and responsive UI transformation of your mobile apps you can explore Daffodil's Mobile App Development Solutions. To determine how these solutions can enhance your product, you can book a free consultation today.