Artificial Intelligence (AI), is a discipline which dates back to 1956. During a workshop held at Dartmouth College campus (USA), the MIT cognitive scientist, Marvin Minsky, said, "Within a generation... the problem of creating "artificial intelligence" will substantially be solved."

AI is a term that’s now, to some extent, in everyone’s thoughts and on everyone’s lips. Some see its evolution as a benefit – perhaps in terms of analyzing enormous amounts of data to help medical science develop cures for cancer. Others see AI as a threat – to their jobs, their lifestyle, their communities and way of life.

Mentioned below are some thoughts from acclaimed tech giants about AI and how it's shaping our future AI application development.

1. “Artificial intelligence would be the ultimate version of Google. The ultimate search engine that would understand everything on the web. It would understand exactly what you wanted, and it would give you the right thing. We're nowhere near doing that now. However, we can get incrementally closer to that, and that is basically what we work on.” —Larry Page (Click to Tweet)

Also Read: How Daffodil develops an AI-enabled mobile app to aid visually and hearing impaired to identify the denomination of Indian currency notes.

2. "By far, the greatest danger of Artificial Intelligence is that people conclude too early that they understand it." Eliezer Yudkowsky (Click to Tweet)

6. "Anything that could give rise to smarter-than-human intelligence - in the form of Artificial Intelligence, brain-computer interfaces, or neuroscience-based human intelligence enhancement - wins hands down beyond contest as doing the most to change the world. Nothing else is even in the same league." —Eliezer Yudkowsky (Click to Tweet)

7. “It's going to be interesting to see how society deals with artificial intelligence, but it will definitely be cool.” —Colin Angle (Click to Tweet)

8. “Artificial intelligence is growing up fast, as are robots whose facial expressions can elicit empathy and make your mirror neurons quiver.” —Diane Ackerman (Click to Tweet)

9. “The pace of progress in artificial intelligence (I’m not referring to narrow AI) is incredibly fast. Unless you have direct exposure to groups like Deepmind, you have no idea how fast—it is growing at a pace close to exponential. The risk of something seriously dangerous happening is in the five-year timeframe. 10 years at most.” —Elon Musk (Click to Tweet)

10. “Some people worry that artificial intelligence will make us feel inferior, but then, anybody in his right mind should have an inferiority complex every time he looks at a flower.” —Alan Kay (Click to Tweet) 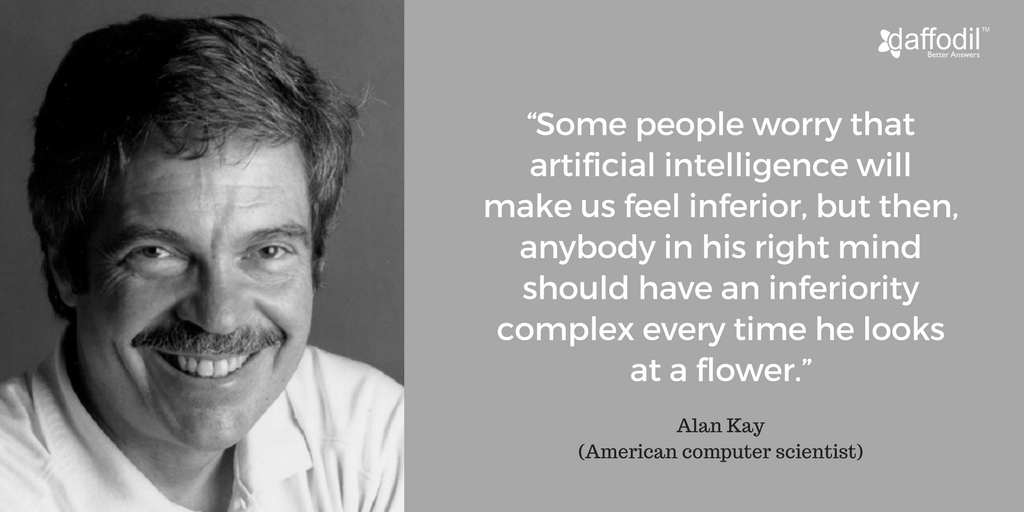 So, what do you think about the possibilities of Artificial Intelligence? What are your opinions? Do share with us in the comments below.

5 Reasons to Build a Messenger Bot for your Business