What are Smart Contracts and How do they Work?

Paper contracts is an old-school approach for binding agreements. Involving multiple intermediaries, several rounds of negotiations, and a lengthy administration of finalized agreement is no more a standard practice. While digital documents are an effortless alternative to these traditional contracts, they are easy to forge.

Is there is a way out? Self-executing contracts that are efficient, secure, digital, and eliminate the go-betweens?

But, what is a smart contract? How do they work? How smart these contracts on Blockchain are? The following section will let you confer all-important facts about smart contracts.

What are Smart Contracts?

To understand smart contracts, the simplest way is to compare it with a vending machine. You pay a certain amount (through cards or currency) and then you get to choose the product code. Once the code is confirmed, you get the product you paid for. However, in order to get the product, there is a set of conditions that must be met. For example: If you made the payment and waited more than the default time to enter the code, you won’t get the product. Or if there is a mechanical malfunction, you have to give it a try, later. And the highlight is, there is no intermediary involved.

To put it simply, smart contracts is an agreement that are defined digitally, and include protocols for validated execution of these promises, without a third-party. With this, there are four elements of a smart contract:

These kind of business conditions are presented in the form of a contract, which is digitally signed by both parties.

2. Defined Digitally: A smart contract is defined in lines of code, which is human-readable and comprises of conditions and outcomes. It’s a software, which converts the code into binary format (0s and 1s) that a machine can read.

3. Include Protocols: A set of rules, generally algorithms that define when and why a case should be true and an action should be performed (for example: release payments).

Lines of Code in Smart Contract:

A smart contract is a code and like every code, it can have bugs. And if not, then possibly, today’s requirement can turn out to be a bug tomorrow (like the Millenium bug). Once a smart contract is deployed on Blockchain, it is irrevocable. That is why, smart contract auditing is a significant step in its deployment.

From Blockchain’s perspective, a smart contract is nothing but a piece of code, which is deployed on a block. This block is a software generated container that has messages (conditions, inputs, outputs) of a smart contract.

Blockchain technology is progressively taking over the business world. As a result, businesses are adopting it to stay ahead in the competition. With this, there is a rising need to give a definite structure of smart contracts. If you are starting with smart contracts development, this anatomy can help you get started. 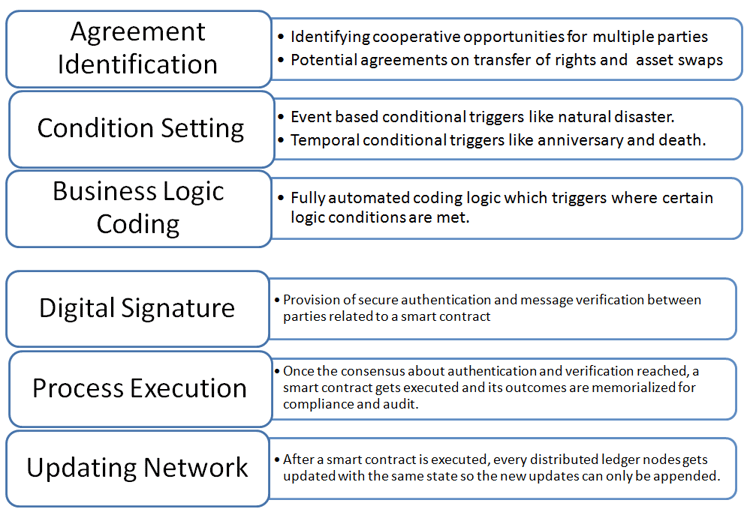 Immutable records and transparency is the USB of Blockchain. That is why, the technology has found its best use cases in fintech industry. Other verticals where Blockchain has found its uses cases include healthcare, real estate, stock trading, automobile, supply chain, eCommerce etc.

For example: eCommerce companies can use Blockchain to make payments with cryptocurrencies, thereby eliminating merchants and payment processors from the process. Automation streamlines the workflow and no intermediary means cost reduction. Brand names in eCommerce industry are making the most of eCommerce. Chinese e-commerce giant Alibaba is using blockchain to fight fake goods on its platform.

By 2022, smart contracts will be in use by more than 25% of global organizations, predicts Gartner. Apart from automation, smart contracts bring the trust of Blockchain technology that encourages its adoption.

4 Technologies that are Shaping the Real-Time Health System (RTHS)