A modern infrastructure that’s agile, flexible, and scalable is on the mind of every infrastructure & operations (I&O) leader. In a cloud-first and automation world, I&O leaders are introducing new ways to utilize and manage infrastructure.

The I&O teams have been manually setting up hardware and software to run an application. However, this process of configuring and managing resources has evolved over time. Thanks to cloud computing services.

Cloud has brought a new paradigm to computing where loosely coupled services are joining to combine to form a fledged application. Cloud computing and its service subdivisions have been helping IT admins to reduce CapEx| OpEx cost, automate infrastructure capacity needs, ensures high availability & low latency, configure servers with compliance, and more. One such cloud service is Infrastructure as Code (IaC).

Infrastructure as Code (IaC) is a DevOps practice that codifies and manages the infrastructure as software. It enables the operations team to manage, monitor, and provision resources (networks, load balancers, connection topology, VMs, etc.) through code.

What problem does IaC solve?

Infrastructure Management: Infrastructure management involves multi-team collaboration. The IT managers install and configure servers, and the network team stores and handle configuration data. This ends up being a tedious and time-consuming practice.

One of the prime challenges, in this case, is scalability as the administrators would struggle to quickly bring/set up a new server to keep up with the expanding business operations. This might also require adding new team members to divide the workload, adding significant cost to the infrastructure management cycle. With Infrastructure as code, the predefined configurations for IT resource in source code help to overcome this problem.

Environment Drift: One of the significant challenges in the DevOps release pipeline is the environment drift. With no infrastructure as code in place, the DevOps team would have to maintain settings for individual deployment environments, resulting in snowflakes.

A snowflake is a server that requires special configuration, beyond what is actually covered in automated deployment scripts. When there is inconsistency in environments, it will result in deployment issues. When there are snowflakes, the infrastructure management and maintenance would require manual intervention, which would therefore be hard to track and contribute to errors.

Avoid Deployment Issues: Infrastructure as Code takes away the dependency from the DevOps team to provision and deploy servers/applications. Developers can create configuration files to deploy a new application for testing purposes or for experimental deployment. This enables the development team to work around missing dependencies or configuration drifts before the operations team takes it to production for deployment.

Automating infrastructure with code allows to deliver a stable environment and scale rapidly. To avail of the benefits of IaC, there are several Infrastructure as Code (IaC) tools available.

Terraform is an open-source IaC tool to codify the management of LaaS, PaaS, SaaS, and hardware resources. It uses its proprietary domain language called Harshicorp Configuration Language (HCL) to express infrastructure as code. It uses declarative config files to create new resources, manage the existing ones, and destroy those that are no longer needed. This open-source IaC tool has a strong community with 450,000+ commits, 4000+ modules, and 1000+ providers. 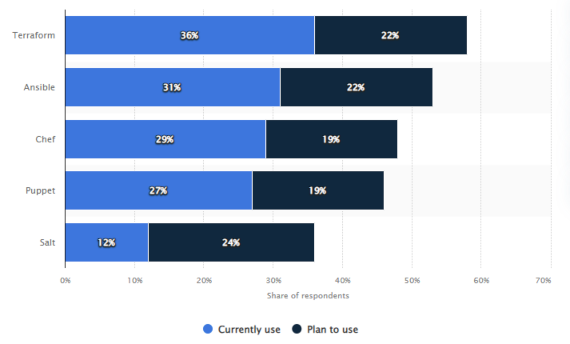 Ansible’s code is written in YAML as Ansible Playbooks. This makes it easy for operations or DevOps engineers to understand and deploy the configurations. The IaC tool by Red Hat can be expanded for features by writing custom Ansible modules and plugins.

Chef is another popular IaC tool that is trusted worldwide for DevOps practices such as continuous integration and continuous delivery. Its infrastructure management tool allows creating ‘recipes’ and ‘cookbooks’ using its Ruby-based DSL.

The IaC tool follows the procedural approach to configuration management. The recipes and cookbooks include step by step guide to achieving desired configuration stage for applications on an existing server. Chef is used by some of the largest companies in the world, which include names such as Facebook, Shopify, Slack, AirBnB. This infrastructure as code tool, Chef. is cloud-agnostic. It works with major cloud services providers such as Google Cloud Platform, AWS, Microsoft Azure, OpenStack, etc. 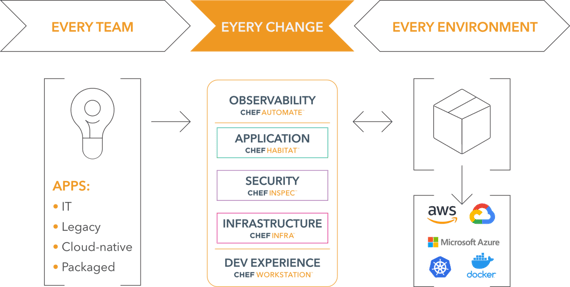 Puppet is a configuration management IaC tool written in Ruby. The automation tool uses a declarative approach to manage configuration on Unix-like and Windows operating systems. It is available in both open-source and enterprise versions.

Since 2005, Puppet has enabled more than 40,000 organizations to automate their infrastructure, 80% of which are Global 5000. Puppet is globally trusted to simplify the complexity of IT infrastructure management and strengthen security, compliance standards, and business resiliency.

Salt is an open-source infrastructure management solution. Acquired by VMWare in 2020, it’s an event-driven automation software to automate ITOps, DevOps, NetOps, or SecOps functions. What sets this Infrastructure as Code tool is the remote execution engine which creates a high-speed, bi-directional communication network for a group of systems. Salt provides a flexible configuration management system, available as the Salt States. Companies that use SaltStack include Linkedin, Hulu, Lyft, Cloudflare, etc.

Just like other tools in the list, CloudFormation is a configuration orchestration tool. However, the prime difference is that it is deeply integrated into and can only be used with Amazon Web Services.

CloudFormation ensures that the best DevOps and GitOps practices are implemented while managing the resources. The IaC tool is integrated with AWS resources which helps in automated scaling of the infrastructure, as required. Some of the popular names that use AWS CloudFormation are GoDaddy, Futbol Club Barcelona, Expedia, etc.

Google Cloud Deployment Manager is an IaC tool that automates the creation and management of Google cloud resources. Using this automation service, the I&O team can write templates and configuration files to create deployments for varied GCP services such as Cloud SQL, Compute Engine, Cloud Storage, etc. Using YAML, a declarative format for automation can be created with this infrastructure as code tool.

ALSO READ: What is Containers as a Service (CaaS)?

Infrastructure Automation: How to Get Started with it?

Let’s agree on the fact that despite having several IaC tools out there, automating infrastructure is a tough task. Managing workloads (Install, Move, Add, Change (IMAC)), user access management, network management, debugging, and troubleshooting. There is a lot more involved in the process of automating an infrastructure.

This clearly indicates that this task should be done by specialists who hold experience in managing the complexities of infrastructure management. At Daffodil, Infrastructure as Code is a significant part of our DevOps services. We enable organizations to make the most out of automation services and thus have built our specialty in it.

To know more about our DevOps services and how our team can codify infrastructure for you, which IaC platform would suit your organizational budget and needs, and more, schedule a free consultation with our DevOps experts.

How To Assess Readiness Of Cloud Infrastructure?

The Role of AI in Intelligent Portfolio Management