Stack Overflow’s 2018 developer survey found Python as the most wanted programming language, surpassing C# and PHP. The growth of this high-level programming language can be estimated from the fact that over 122,864 websites online are built using Python, with 93,197 unique domains. | According to Similar Tech 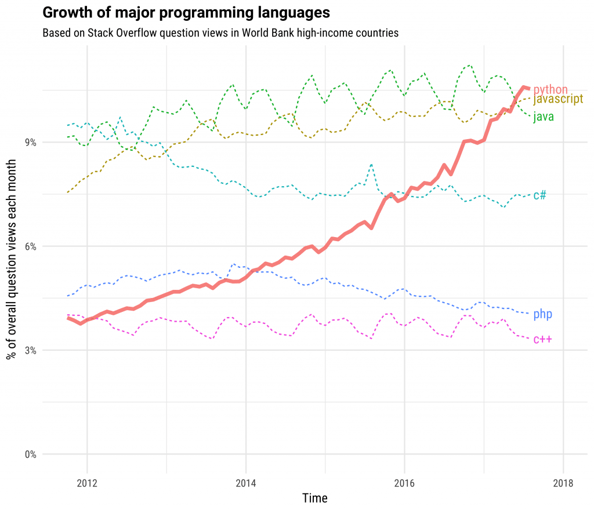 The programming language is primarily used for data analysis, web development, and DevOps operations. | According to Opensource.com

With Python gaining so much traction amongst the developers’ community, it is obvious to find a number of Python frameworks to ease the web application development process. Here are the top 10 Python frameworks, enabling developers to do more with fewer lines of code.

Django is an open-source, Python framework that is known for building complex data-driven websites. The framework has templates, libraries, and APIs that help in building scalable web-development projects. Django is the most popular Python framework and is the basis for various popular websites, including Instagram, Pinterest, Bitbucket, Nextdoor, The Washington Times, etc.

Numpy- Numeric Python is a library that helps in performing mathematical and logical operations on arrays. The library consists of a multidimensional array of objects and a collection of routines for processing the arrays.

Pandas is a BSD-licensed, open-source Python library that provides easy to use data structures and data analytics tools for Python programmers. The framework is primarily used in academic and commercial domains, such as finance, economics, analytics, statistics etc.

Matplotlib is a plotting library that allows the creation of 2D graphs and plots by using Python scripts. It supports a variety of graphs and plots, which includes bar charts, histograms, error charts, power spectra etc. The library has got a module named Pyplot that makes plotting easy with features like colour line styles, formatting axes, font properties etc.

Flask is a micro web framework that’s built-in with a development server and support for unit testing. This Unicode based Python framework supports RESTFUL request dispatching and is extensively documented for programmers to get started.

Web2py is a cross-platform framework for web development, written in Python. Introduced in 2007, the framework comes with a code editor, debugger, and deployment tools.

The bottle is a WSGI micro web framework, which is distributed as a single file module with no dependencies other than the Python Standard Library. It has support for request dispatching with URL support, key/value databases and templates, and a built-in HTTP server.

CherryPy provides the CRUD (Create, Retrieve, Update and Delete) functionalities for applications and helps in managing the project from anywhere using the user’s browser. The framework can run on multiple HTTP servers, have a flexible plugin system, and has built-in profiling, coverage, and testing support.

Falcon is a micro-framework for developing small scale applications and backend. The Falcon web framework encourages the REST architectural style and is available with a number of add-ons, templates, and complementary packages to ease development.

It is a full-stack framework developed and curated by Logilab, CubicWeb is a free-to-use, semantic, open-source, Python-based web framework. Based on the data model, CubicWeb requires the same definition in order to develop a functional application.

Unlike other popular Python frameworks that use separate views and models, CubicWeb makes use of a cube. Multiple cubes are then joined together for creating an instance with the help of a database, a web server, and some configuration files.

Microframework Dash is an open-source Python-based framework for building analytical web applications. It is an ideal Python framework for data scientists that aren’t much into the mechanics of web development.

Applications designed with Dash are web servers that run Flask and communicate with JSON packets via HTTP requests. Their frontend renders components using ReactJS. Flask plugins can be used for extending the capabilities of Dash.

Full-stack framework Based on the Model View Controller pattern, Giotto is an application framework for Python. In order to allow web designers, web developers, and system admins to work independently, Giotto separates Model, View, and Controller elements in order.

Asynchronous framework Inspired by the NodeJS and the Express/Connect frameworks, Growler is a micro web framework written atop Python’s asyncio library.

Unlike other conventional Python frameworks, requests in Growler aren’t handled in the framework but by passing through middleware technology.

Which is the most popular Python framework?

Python and its frameworks are opening ways for building robust and scalable applications with fewer lines of code. Along with the 10 popular options shared above, which Python framework do you think works well for Python web application development and why? Share with us in the comments below.