Android TV App Development: Why Businesses Should give a Thought to it?

Today, entertainment is no longer confined to appointment viewing on TV. The video streaming marketplace is becoming extensive and on-demand videos or binge-watching are turning out to be the greatest trend of this time. That is why streaming entertainment businesses are trying to reach out to their audiences through every possible medium, including smartphones, tablets, computers, and even on TV. This has lead to a high demand for TV app development.

TV apps are just like mobile apps. However, while there is a duopoly of Android and iOS Operating System in the mobile world, there are a variety of streaming devices and OS for TV for which an app can be developed. Android TV, Roku, FireTV, Apple TV are some of the prime streaming devices for building a TV app.

Depending upon their popularity in certain geographical regions and support for streaming channels, the right platform choice can be made for OTT TV app development. In one of our recent articles, we have done a comparative analysis of all well-known streaming platforms, so that businesses can make an informed choice between them.

While the apps are quite similar in terms of their look & feel, but still the user interaction model is substantially different. Here are some of the prime differences between Android for mobile and Android for TV apps.

Likewise, when designing and building a TV app, a lot of attention should be paid to user interaction. While it varies a lot from mobile/tablet app in terms of UX, both of them should be able to provide an immersive experience to the users, irrespective of the device.

Despite a number of streaming platforms existing, Android TV apps are gaining ground. Around 40% of the Smart TVs are built on Android TV Operating System. With such a commendable market share, businesses definitely have the reason to invest in an Android TV app. 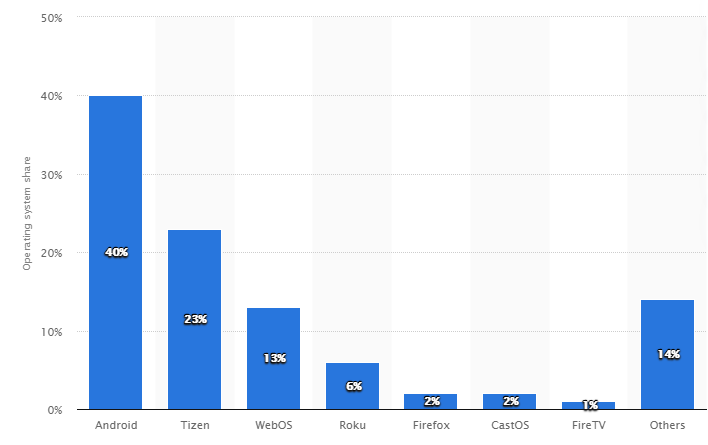 Moreover, some of the top SmartTV manufacturers, such as Sony, Philips, Hisense, etc., are building their TVs with Android Operating System. This makes it obvious that Android TVs have an extensive reach, which makes it a choice for businesses to build a TV app-based on it.

Now that you know the key to create the user interface and user experience for TV apps, you need to have a technical roadmap for development. To understand how to get started with Android TV app development, set-up a 30-minute free consultation with our Over-the-Top (OTT) app development team.

Once a roadmap for development is ready, you can either hire developers to improve your existing TV development project or let our team manage the entire project, right from ideation to feature listing, development, and production.

EdTech Trends to Watch Out in 2020

How Artificial Intelligence is Helping Fight the COVID-19 Pandemic