Why Nodejs is the Right Choice for Enterprise Organizations?

Scalability, security, flexibility, and speed are some of the catchwords for enterprises today. When we specifically talk about application development, javascript has proven to be the most versatile technology. Tools, frameworks, and libraries built on this technology are gaining ground amongst the developers  for several reasons.

One of the popular javascript platforms that we have today is Nodejs. Backend development (including APIs), full-stack & frontend development are three prime reasons why Nodejs is so popular amongst the developer’s community worldwide.

Apart from this, improvement in developers’ productivity, increased application performance, faster development, reduced cost are some of the factors that are in favor of Nodejs for application development. 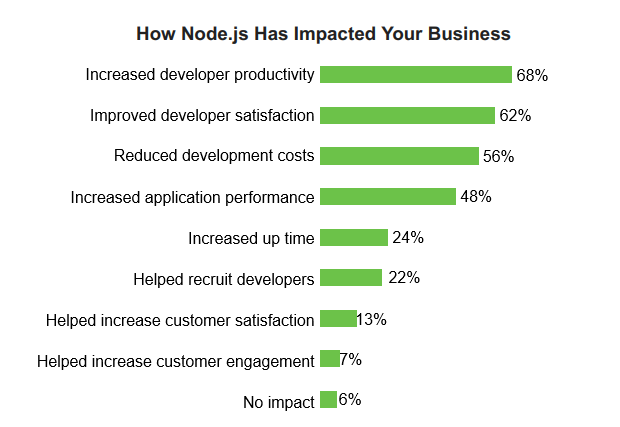 In the next segment, we will be discussing some of the significant factors that contribute to making Nodejs as a development platform for enterprise organizations.

In general, a javascript engine interprets or compiles a JS code into machine code. Javascript, being a higher level of dynamic language does not interact with low-level machine logic.

Node.js is built on Google’s V8 engine which utilizes ‘Just-in-Time compilation to bytecode. Unlike most of the JS engines that interpret the JS code, V8 compiles uses just-in-time (JIT) compilation where the JS code is converted into bytecode, instead of a machine language.

Since this engine interacts directly with the OS (system’s kernel), its performance is faster as compared to other JS engines. Since Nodejs uses this javascript engine, there is an assurance of improved application performance.

One of the major problems that synchronous applications have is, one function must execute before the next function occurs. The best thing about Nodejs is- it’s event-driven, single-threaded, and asynchronous. Let’s understand the benefits of Nodejs having this architecture.

Imagine you’re in a long queue at a coffeehouse, waiting to place your order. There is only one cashier at the counter who is taking the order, money, and also preparing the coffee and food in the kitchen. Once an order is prepared and served, the cashier continues to take another order and proceed likewise. When the cashier is working in this way, there are more chances of delay, it frustrates customers as the cashier is unable to take more orders until one is being completely processed.

The above scenarios exemplifies a blocking system. In order to resolve this problem, one might think of adding more cashiers (additional resources). However, this won’t prove to be a feasible solution as the number of customers can increase at any point in time.

Usually, in a thread-based model, when a server receives a connection, it keeps it open until the connection performs the request. This request can either be a page request or writing a transaction to the database. For the time a request is being processed, the server stays blocked on that I/O operation. When such a server type needs to be scaled, additional copies of the server are required where each copy would have separate OS thread. While such a multi-threaded system works fine, they don’t work out as the application scales and it becomes resource-intensive with more client-requests, leading to the requirement of more memory and related resources.

Now, let’s bring a small change to the coffeehouse model. Along with the cashier, there is a chef who is responsible for preparing the coffee and food in the kitchen. As the cashier accepts the order, he passes the request to the chef (to prepare the order). While the customers receive their order, they are given a token number and are requested to wait while their order is being prepared.

This coffeehouse model is non-blocking, single-threaded, and resembles that of Nodejs. The prime component of it is the event loop which is responsible for continuously listening to the requests (cashier in the coffeehouse model). As the requests come, the event loop keeps assigning the task to another entity (worker thread pool) for performing actual operation. As a task is performed, a response is sent to the client via callbacks (which, in the coffeehouse model is the token number that the chef calls for the customer to collect the order).

Nodejs allows for handling multiple connections simultaneously. Most of the application development platforms create new threads for every new request, taking up all the RAM for processing a request. Contrary to this, Nodejs operates on a single-thread, making use of the event loop and delegating tasks to the worker threads. This allows Nodejs to handle hundreds of tasks concurrently.

To avoid I/O blocking, Nodejs replies up on callbacks. These callbacks are nothing but the functions that run when a request is finished. There are times when a callback function is in another callback function, which further, is in a different callback. Such a situation (nested callback) makes the code difficult to read and that’s when the need for the promise, async/await & try/catch statement comes in.

A promise in Node is an action that will either be completed or rejected. A promise is kept if a request is completed and otherwise, the promise is broken. And just link callbacks, promises can be chained.

And to further simplify this problem of chained promises, there are async/await and try/catch statements. These statements help in code understanding & maintenance, error handling, trace the root cause of a problem, and more.

Nodejs is one of the preferred choices for developing RESTFUL APIs. Using Nodejs frameworks such as Hapi, express, etc., it is possible for developers to develop APIs in the least time possible. Since Nodejs uses the javascript language for development, it is a versatile option for JS programmers to build a complete application (frontend, backend, and APIs).

The Crypto module in Nodejs offers algorithms that perform data decryption and decryption. This is specifically used for data security purposes like user authentication wherein the requirement is to store a password in the database in an encrypted format. For such functionality, the crypto module has a set of classes like HMAC, cipher, decipher, hash, sigh, and verify.

Apart from the functionalities mentioned above, Nodejs has an amazing community of contributors, has features like clustering for maximum utilization of resources, Zlib for compressing files and data, and has the ability to avoid communication latency between the client/server, and more.

Moreover, Nodejs is a suitable choice for building dynamic applications. If you have chosen Nodejs as the technology for your next app, then hire Nodejs developers who can help you to make the most of this technology.

How to Avoid Duplicate API Requests?