How to Optimize an eCommerce Store for Peak Usage?

Amazon, IKEA, AliExpress, Wish, Walmart, Letgo, Groupon. These eCommerce platforms might differ by their product type but they all have something in common- the challenges in developing and then maintaining a scalable platform.

While most of the eCommerce stores start with a simple app built on Java, Swift, backend languages, and databases; they eventually evolve into a complex solution. But before that happens, it is a good practice to design an eCommerce platform in a way that it can scale, as the demand strikes.

Building an eCommerce platform keeping scalability in mind demands planning for challenges that may be confronted in the future. Some of the common issues that are encountered as an eCommerce app scales are:

An evolving app means ‘N’ number of changes being pushed on a regular basis. Some for technical improvement, some for advancement, while others for simply enhancing the user experience. No matter how big or small a change is, pushing it across an app is certainly a difficult job to do. One of the major challenges that scalability brings along is changes to a stable app, which most of the time hamper the continuous development and deployment cycle.

Faulty components or modules in an app can affect the app’s performance, hinder user experience, and even bring the entire app down. With scalability, there is complexity of languages, third party services, databases, and other technologies. Continuous monitoring of apps to identify and fix faults is, therefore, one of the crucial components of building a scalable eCommerce app.

Resource management is the toughest job when building and managing an app. Scaling the resources up and down as the demand or traffic strikes is an important aspect of reducing capital expense (CapEx)* and operational expense (OpEx)**. Also, traffic spikes are unpredictable. Over-estimation or under-estimation of resources can both lead to reduced ROI and inferior user experience.

*CapEx: CapEx is the cost that a company invests in acquiring, upgrading, and maintaining physical assets. This may include an application server, databases, networking capacity, software licenses, storage, development stacks, etc.

In general, apps are built using one or two languages. This usually creates technology barriers when new features and functionalities are to be introduced in a scalable app. To bring versatility in an app as it grows, it is important to utilize the best of tools, languages, frameworks, and do not limit to just one of them.

eCommerce App Development: How to Overcome the Challenges

When scalability, cost optimization, tech flexibility, fault isolation are the major aspects of building a successful app, opting for Serverless Microservices is the solution.

Microservices is a modular approach to software development wherein an independent group of components is built that runs each application process as a service. 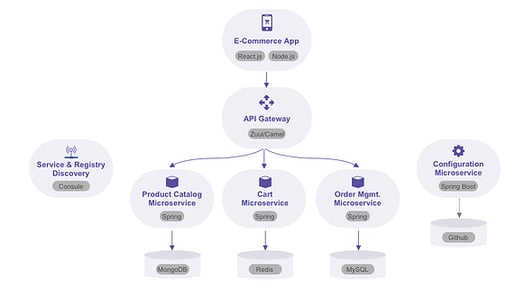 Building an app with Microservices architecture offers a number of benefits, including:

Thus, selecting an architecture like Microservices can be of great help to deal with challenges such as continuous deployment, ensuring fault isolation, complex code management, limited technology stack usage, etc.

One of the major advantages of serverless architecture is it allows scaling-up and scaling-down of resources, as the demand strikes. So, you can actually start with fewer resources initially and as the app scales, traffic boosts, the resources will expand automatically. That means, reduced CapEx and OpEx.

With the suggestion to build an app on serverless microservices architecture, we discussed technologies that can prepare an eCommerce store for peak usage. Now, let’s understand the best, general practices that can help in decision making for a successful business online.

Planning and testing are two essential aspects of planning for the future. Make sure that you use the historical metrics to forecast the future model.

Try to eliminate manual efforts, as much as possible and automate tasks. For example, take advantage of services like Route53 to autoscale DNS, Elastic load balancing for automatic failover, etc. You can compare the automation services by different cloud service providers and make a choice accordingly.

Use continuous monitoring services to keep a check on performance, infrastructure, API, database, and other components so give users a seamless experience as the app evolves.

ALSO READ: On-Premise to AWS Migration: Know Why and How to do it?

A number of tools, technologies, and practices contribute to developing a futuristic eCommerce store. If building one is on your mind, then set up a free consultation with our experts who will understand your business, its scale, requirements and suggests the best to build an eCommerce store for the future.